The Senate recently passed a $1 trillion infrastructure bill that seems likely to eventually become law. How much debt does that mean, and should we worry about it?

Since the beginning of 2020, the total public debt has gone from around $23 trillion to about $28 trillion. Keep in mind that overall US GDP is just over $20 trillion on average, so we could apply the entire output of the US economy for a year and a half and just barely pay off the debt. Another way to look at it is that the government spent all the taxes taken in since the beginning of the lockdown and then an additional 25% of the entire country’s total income. These are big numbers!

Is this a problem? Is it going to inevitably lead to inflation? The answers might surprise you.

Conventional wisdom as well as recent feedback at the grocery store and gas pump suggests inflation has definitely arrived. However, there are a number of strongly deflationary pressures at work, too, and there’s a good chance over the next 10 years the Fed could have a hard time keeping inflation above or even near their target of 2% annual inflation.

For one thing, population growth is slowing down. Population growth was close to 1.4% a year as recently as the 1990s, and now sits at 0.35%. Absent big changes in immigration policy (unlikely) or big changes in birthrates for Americans already here (even more unlikely), America will start seeing population decline soon. Japan has been losing population on average for more than 10 years, and this is one reason Japan has been frequently experienced years of falling consumer prices in the last few decades. The number of consumers is not growing and the population is aging, leading to more retirees and fewer workers.

Another strong deflationary factor is the rise of technology. Much recent inflationary pressure is likely transient, in things like used car prices, airfare and hotel rates. At the same time, lots of stuff is getting cheaper, like televisions and computing power. And while smartphones may not seem cheap, the idea of a device in your pocket that can make calls, send messages, and listen to or watch almost any media created in all of human history is a pretty nifty innovation and means you don’t have to buy many products you might previously have bought. In the 1990s, one CD cost around $15 — now you can have access to almost all the music in the world for about half that per month.

Nobody is exactly sure what the future holds, and everyone loves to second guess our elected and appointed officials. However, the employees and appointees at the Fed are not stupid. If inflation was the only thing we have to fear, the Fed wouldn’t continually try to push inflation up to a higher long-term average target. I believe they’re preemptively erring on the side of inflation to prevent disinflationary pressures from taking root too strongly. Deflation sounds nice as a consumer, but its effect on the economy is much worse than mild to moderate inflation. By the way, debt itself is deflationary too (for one reason, money that could be spent goes to pay off bonds instead), and there’s plenty of debt in the system.

In the end, it’s not too useful to speculate as to whether inflationary or deflationary pressures will win. Probably both will happen at some point, it’s just a matter of time horizon. The important thing for investors to remember is to stay diversified. Exposure to US investments and the dollar could continue to outperform for years into the future. On the other hand, if our outsized stimulus spending starts to catch up with us then exposure to non-US developed markets and even emerging and frontier markets (and currencies) will play an extremely important role going forward.

We’re all feeling the pressure from inflation in the short term, but there’s no guarantee it will persist. We might even miss it if it goes away. 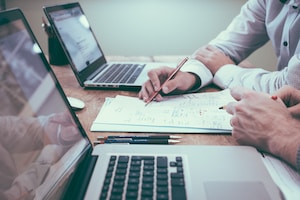 September 23, 2021 at 6:00pm Central This session is an opportunity to learn more about how investments are selected and managed at Telarray. We hope

New clients at Telarray are offered a session at the beginning of our relationship to discuss the Telarray approach to investing. It’s a lot to process, and we know there

Behind the Scenes: Meet the Investment Department

As our valued client, you know your Advisor well, but at Telarray we have many skilled professionals who work behind the scenes, helping build your